See this lens. It is really, really heavy. And it weighs like three times as much as my Canon Rebel XTi But, it has a really good zoom. A friend let me borrow it and thank goodness, or else I never would have been able to take the following pictures.

if you are wondering. And, if you have a small fortune, you can buy one yourself. But make sure you are pretty strong or have a tripod because it’s kinda difficult to hold steady.

So anyway, on Tuesday morning, MM, the punkettes and I went out on the ranch to feed the cows. I thought I was going to feed them through a fence or something, but let me tell you, I was way off. We rolled up in the truck. (Let me rephrase that) The feed truck … and the cows came running. MM said I could get out. What!? Get out? With the cows? For a second, I thought, “What if they stampede me or something to get to the food.” And the next second I had jumped out with my heavy camera in hand.

And if weren’t for The Pioneer Woman’s Action Sets I downloaded today, these pictures wouldn’t look anywhere near as good as they do now. I love Actions!

Here are some of the pictures I took. There were baby cows everywhere. And freaky, quit looking at me that way cows. They all had so much character. Look at this little cutie. And this one. It looks like he has a little frosting to lick off his lips. No, it’s just milk mouth. And, look at this Longhorn. I stayed back a ways from this one. These four might be my favorite. Just something about their faces. I think I am now officially obsessed with cows. I think I could take pictures of them all day. Maybe, I’ll start a cow blog. Oh, wait, I don’t have any cows. Okay, I’ll stick to cupcakes. After we fed the cows, MM drove me around the ranch and we went to see the ranch horses. I love horses. Of course, there were more cows, too. And look over to the upper left of this photo. Those are wild mustangs on the other side of the fence.
Hundreds of them live on their land. But, I’ll show you more on mustangs later. Unlike this ranch horse. I think I must have scared it.

Now, since I’m talking about animals, let me introduce you to Charlie.

Back at the lodge… Remember how I told you he was sprayed by a skunk. Poor Charlie. He wanted to come in the lodge so badly. The party was starting and people were arriving and poor Charlie could only watch from the porch. Quit looking at me with those eyes. I can’t let you in. Quit it I say. Poor Charlie finally gave up and walked home while we all took pictures of him through the window.

Wait a minute… Where did those people come from. Hmmm… the Pop Party must have started.

Next up: The Pioneer Woman Hosts a Cake Pop Party 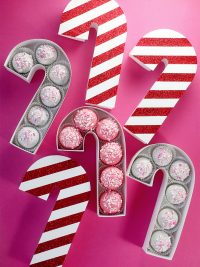