Assemble: Remove paper liners. Cut cupcake in half horizontally. Place a small scoop of ice cream in between the two cupcake halves. Top with another scoop of ice cream and drizzle with Chili Chocolate Ganache. Sprinkle chopped chocolate shavings to top it off. Eat right away. 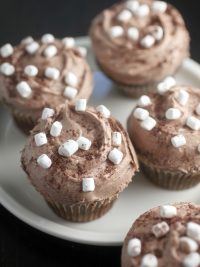