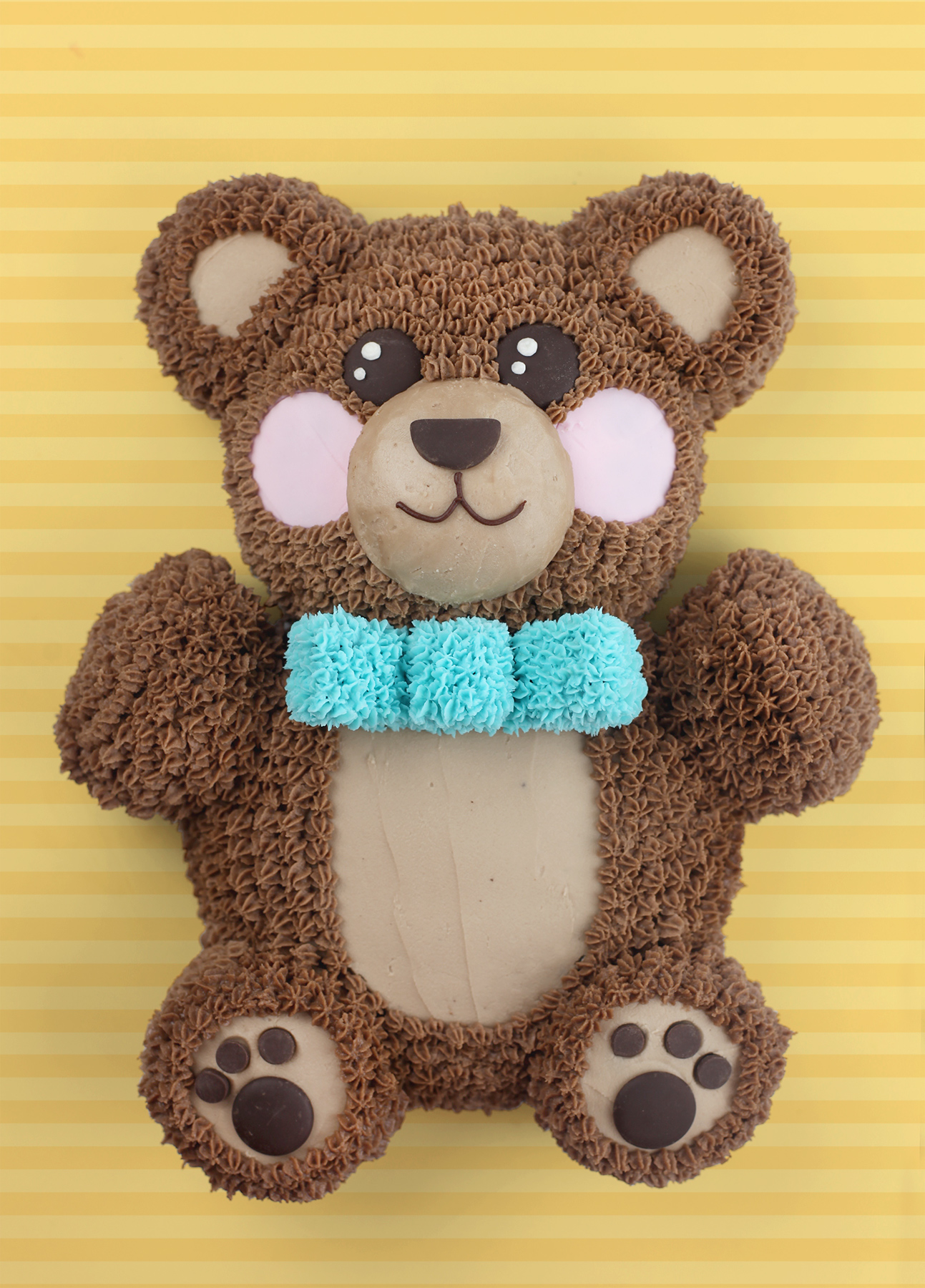 I’m pretty thrilled with how this little teddy bear turned out. It’s the first time I’ve tried to make and decorate a three dimensional decorated cake like this, but I think he looks beary cute!

The inspiration for the shape came when I was actually making another cake. I had baked a two-layer, six-inch cake and made some cupcakes with the extra batter from the recipe. 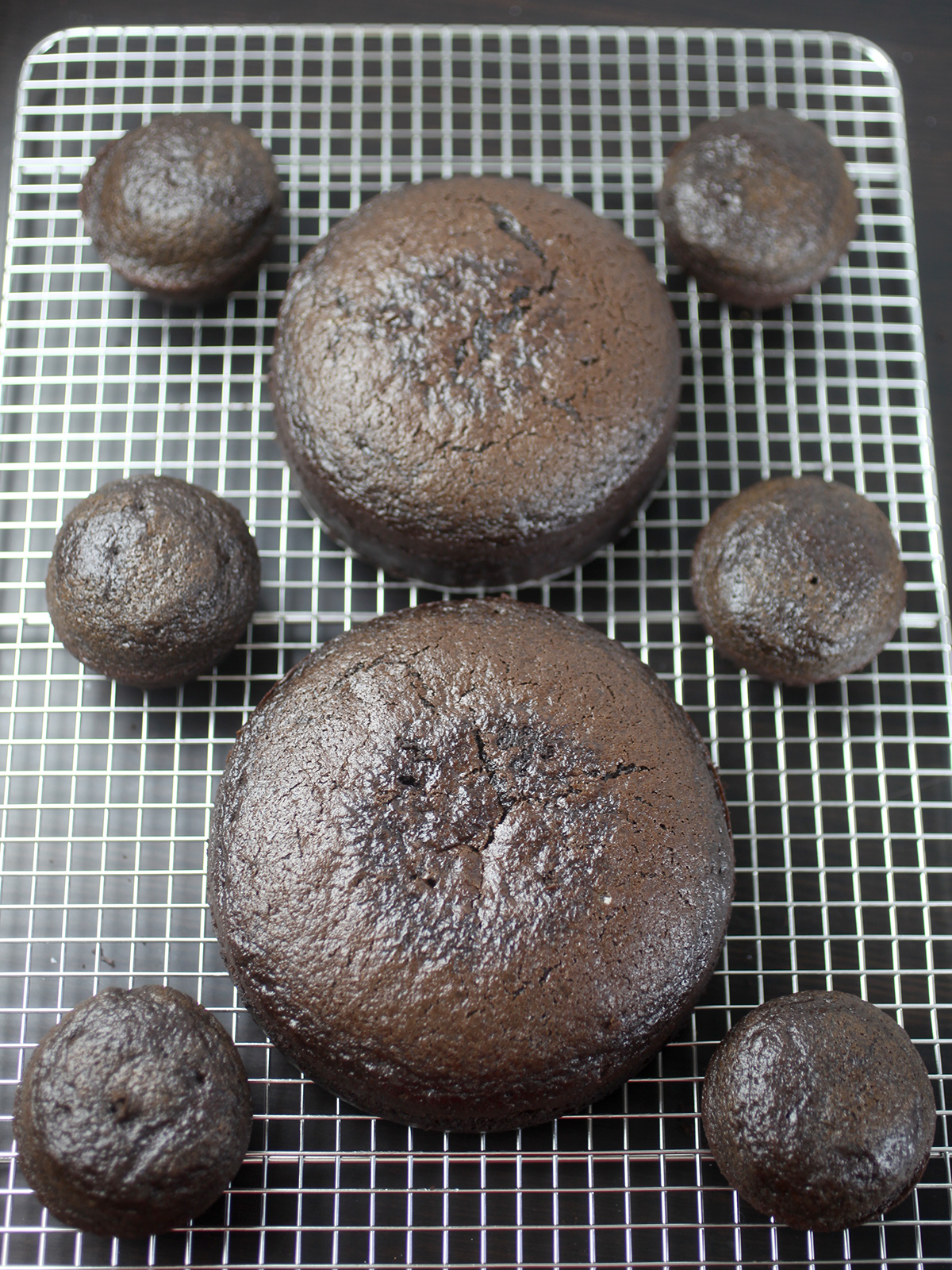 When I set them out to cool, they all looked something like this. I immediately saw a “bear” with little cupcake legs and ears. 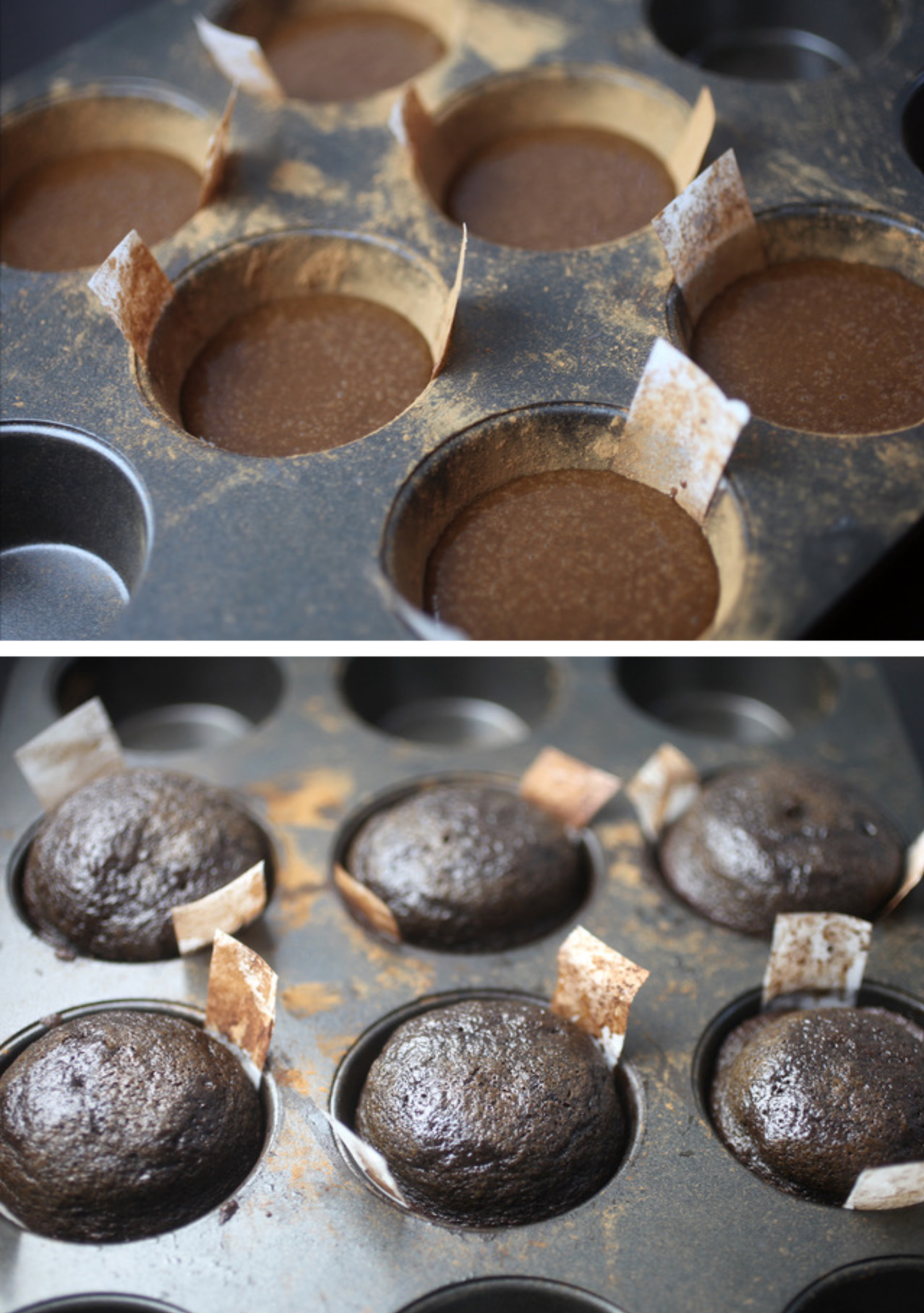 I used this delicious cake recipe and it makes the perfect amount for a complete teddy bear.

In the pic above, I baked the cupcakes without liners and greased the cupcake tin with shortening, placed strips of parchment paper inside and greased again to keep them in place. Then I coated it with cocoa to help prevent sticking.

You probably don’t need the strips, but I didn’t want to take any chances on having trouble removing a cupcake since I needed all six for the bear shape. 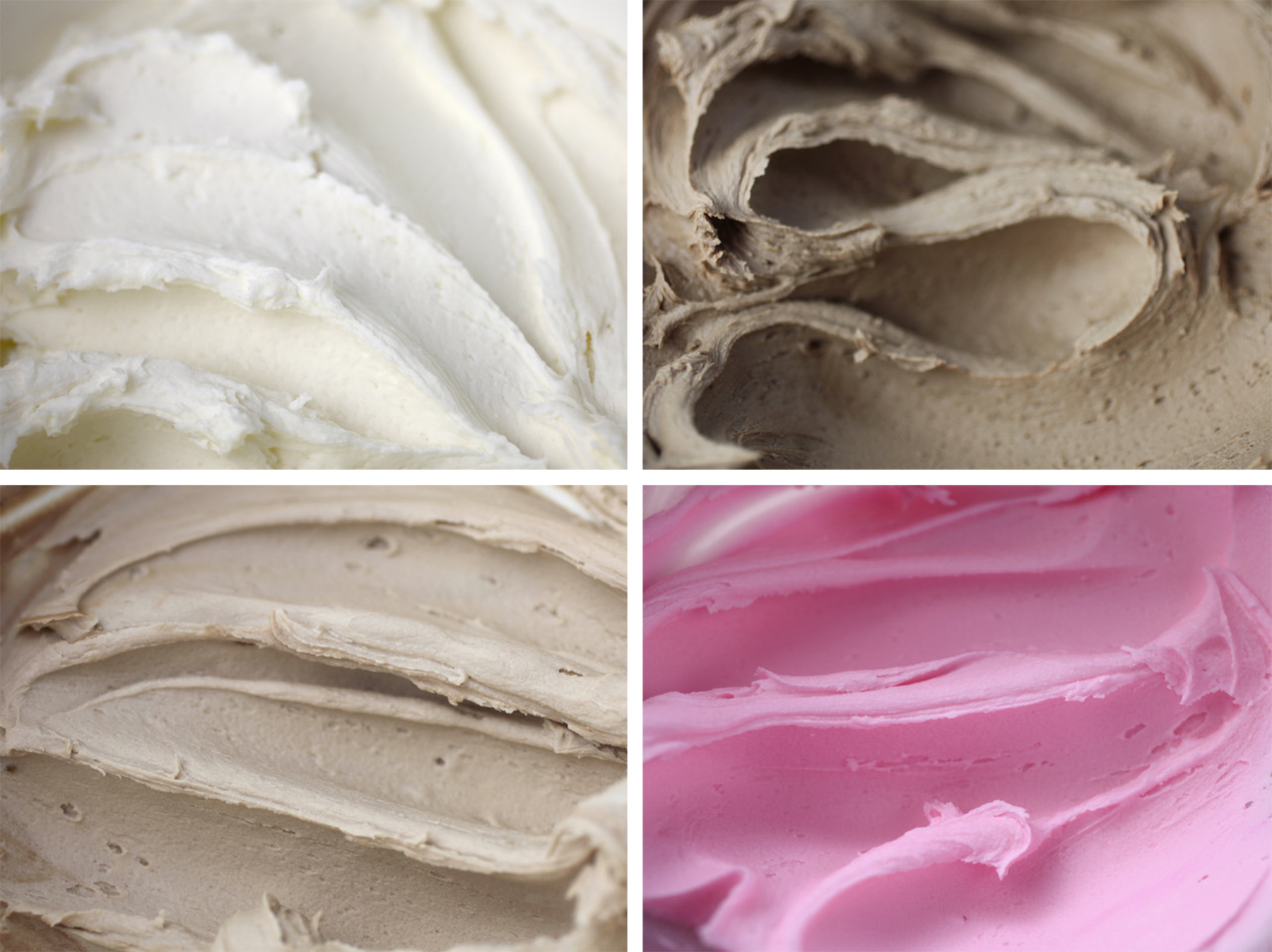 Once you have your cakes and cupcakes baked, go ahead and mix up some buttercream frosting.

I used this frosting recipe to make one batch of vanilla buttercream and then made a second batch of buttercream and added 1/3 cup of unsweetened cocoa to the confectioner’s sugar to make chocolate frosting.

Then use the remaining vanilla buttercream and mix in a small amount of the chocolate buttercream to create a lighter brown color for the belly, nose, paws and ears. 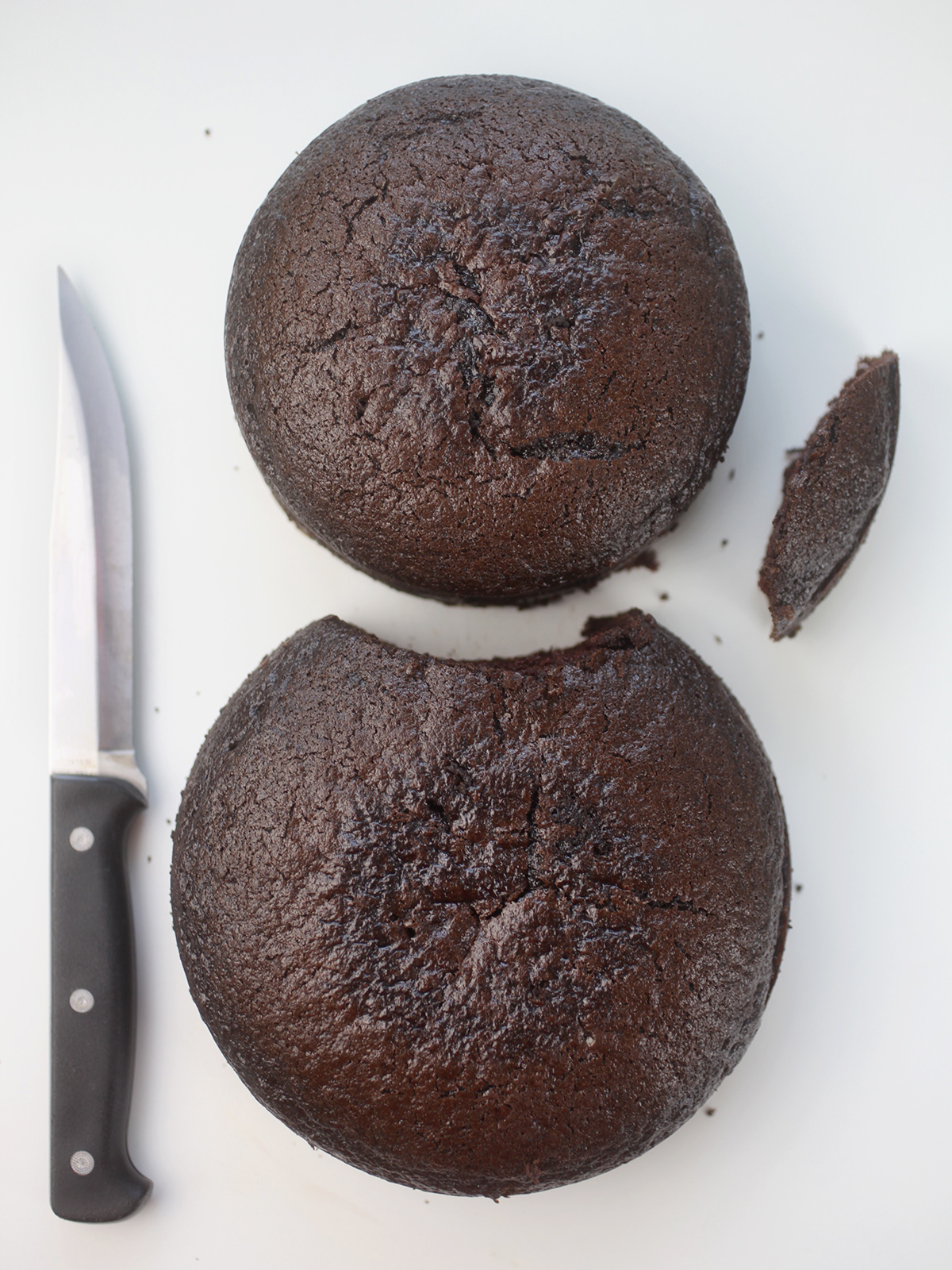 To start creating the bear shape, use a sharp knife to remove a small curved portion from the larger 6-inch cake layer. Save the curved cake scrap for use later. 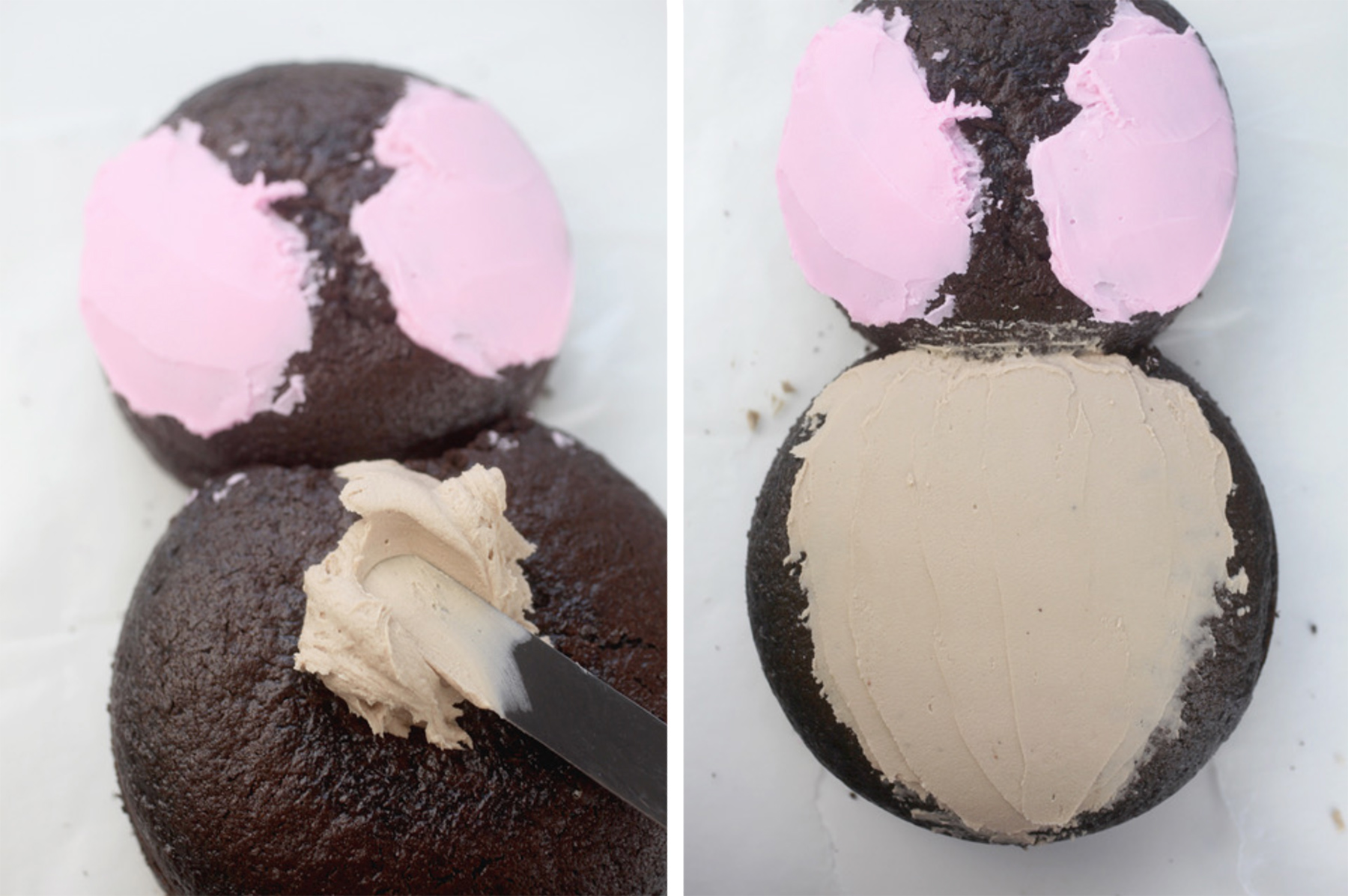 Push the 5- and 6-inch cake layers together to form the head and body. Place them on a large rectangular sturdy surface. You can use a baking sheet for instance. I used a rectangular heavy-duty cake board.

Frost an area for the cheeks with pink buttercream and the area for the belly with the light brown buttercream. Frost over a large area so you have the freedom to make the belly and cheeks any size you want when piping the furry frosting later. 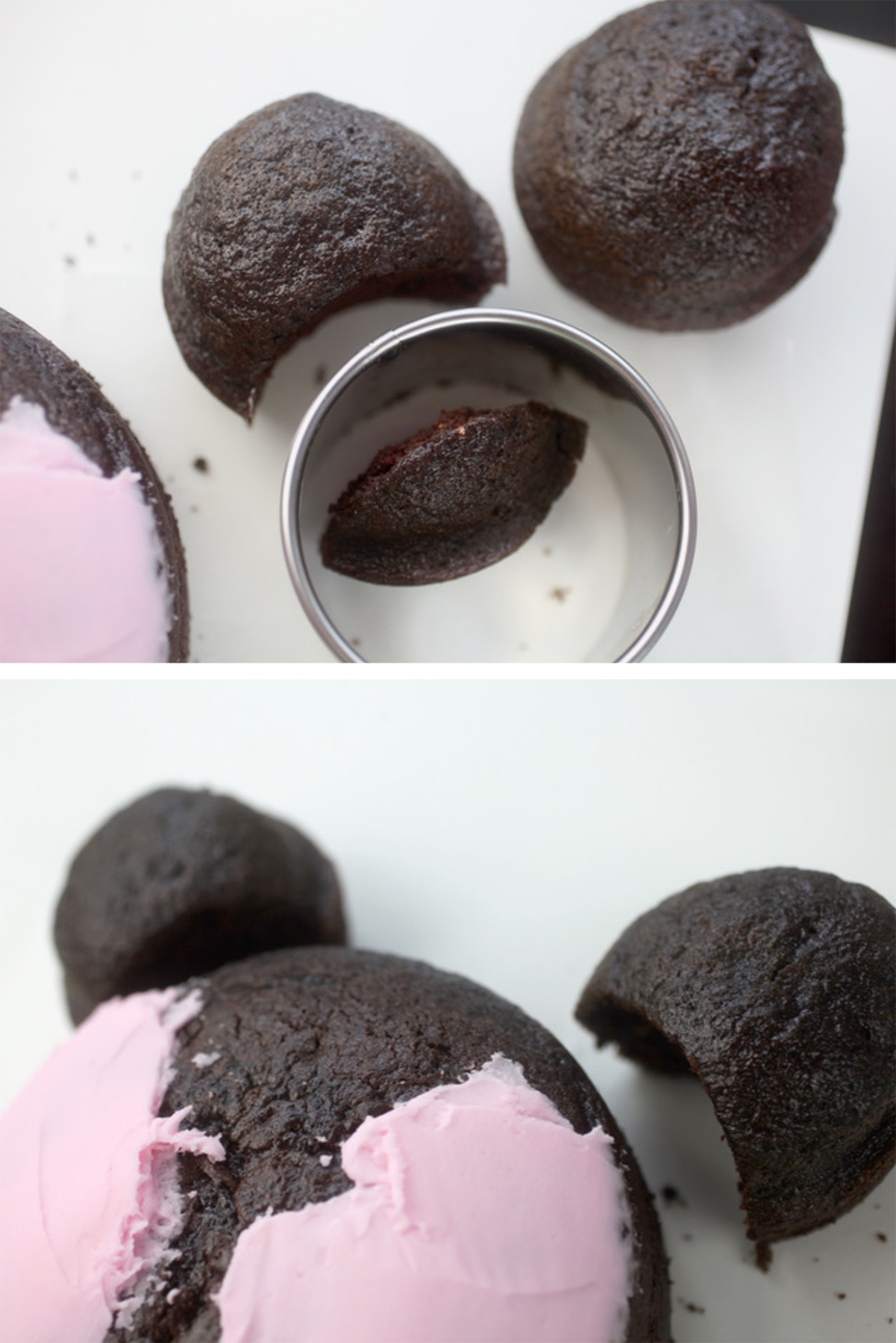 Use a round cutter to cut curved sections from two of the cupcakes. These will end up being placed on the head for ears. Save any scraps for use later. 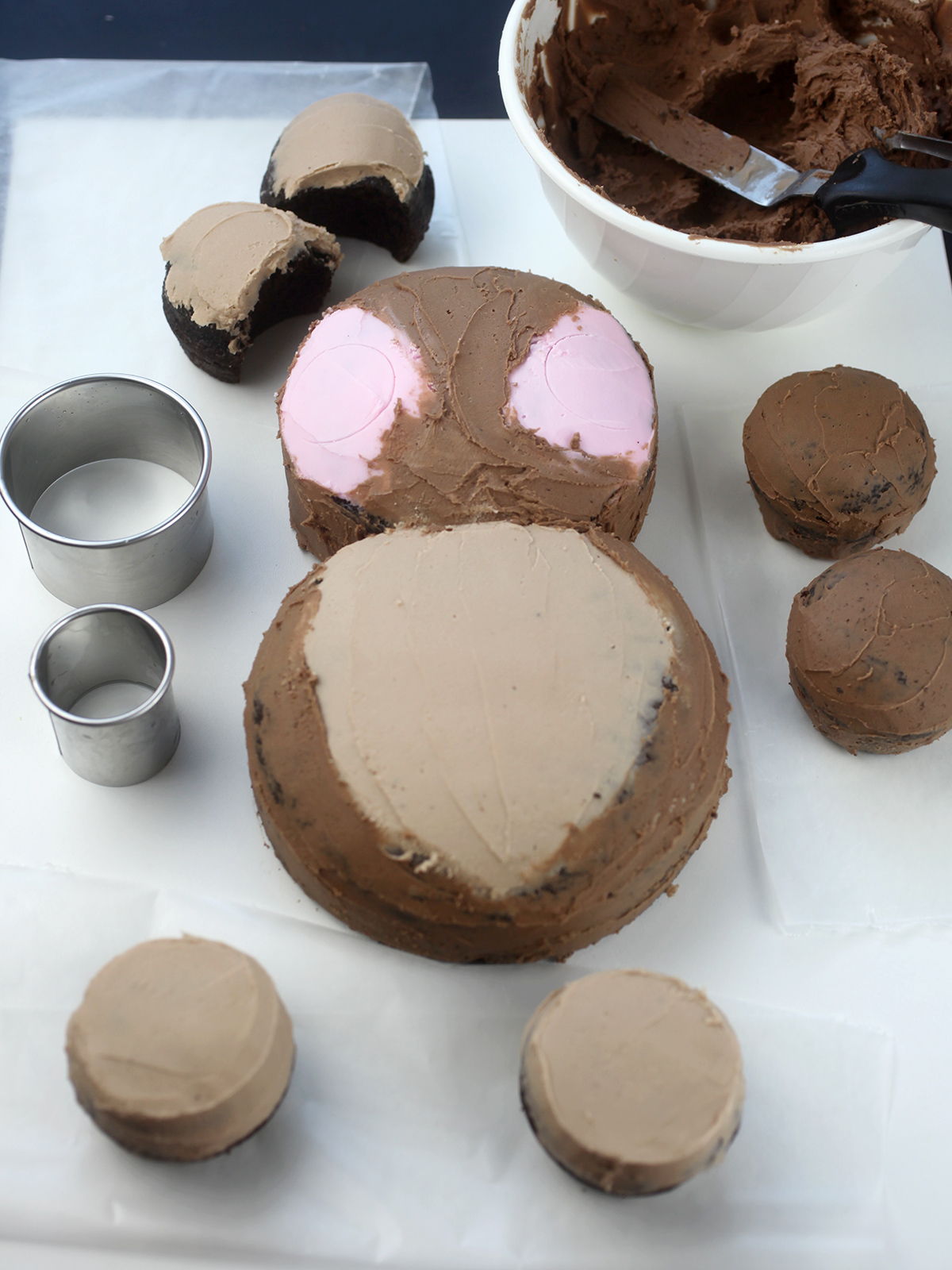 Use a small round cutter to gently press into the pink frosting to mark where the cheeks will go.

Now to add more frosting. Go ahead and spread a thin layer of the chocolate frosting on the exposed cake layers. Then frost a thin layer on two more of the cupcakes. 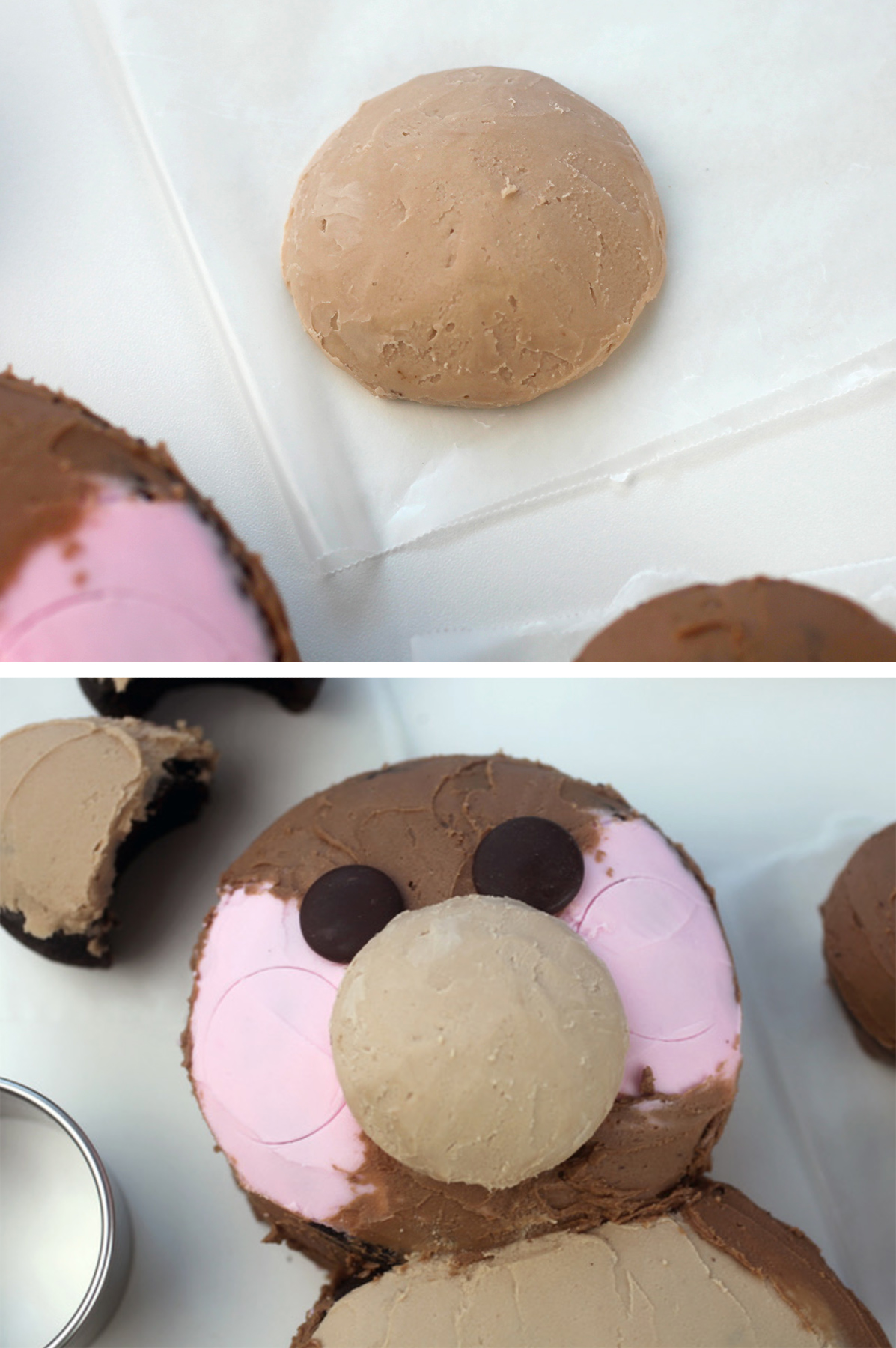 For the bear snout, I ended up piping a circular mound of the light brown frosting onto a sheet of wax paper and then used an offset spatula to help smooth it out. Place the mound of frosting in the freezer to firm up and you can use the spatula to help scrape and shape it even more.

Place the snout in position on the bear’s head and then slightly tuck two chocolate wafers underneath … in position for eyes. 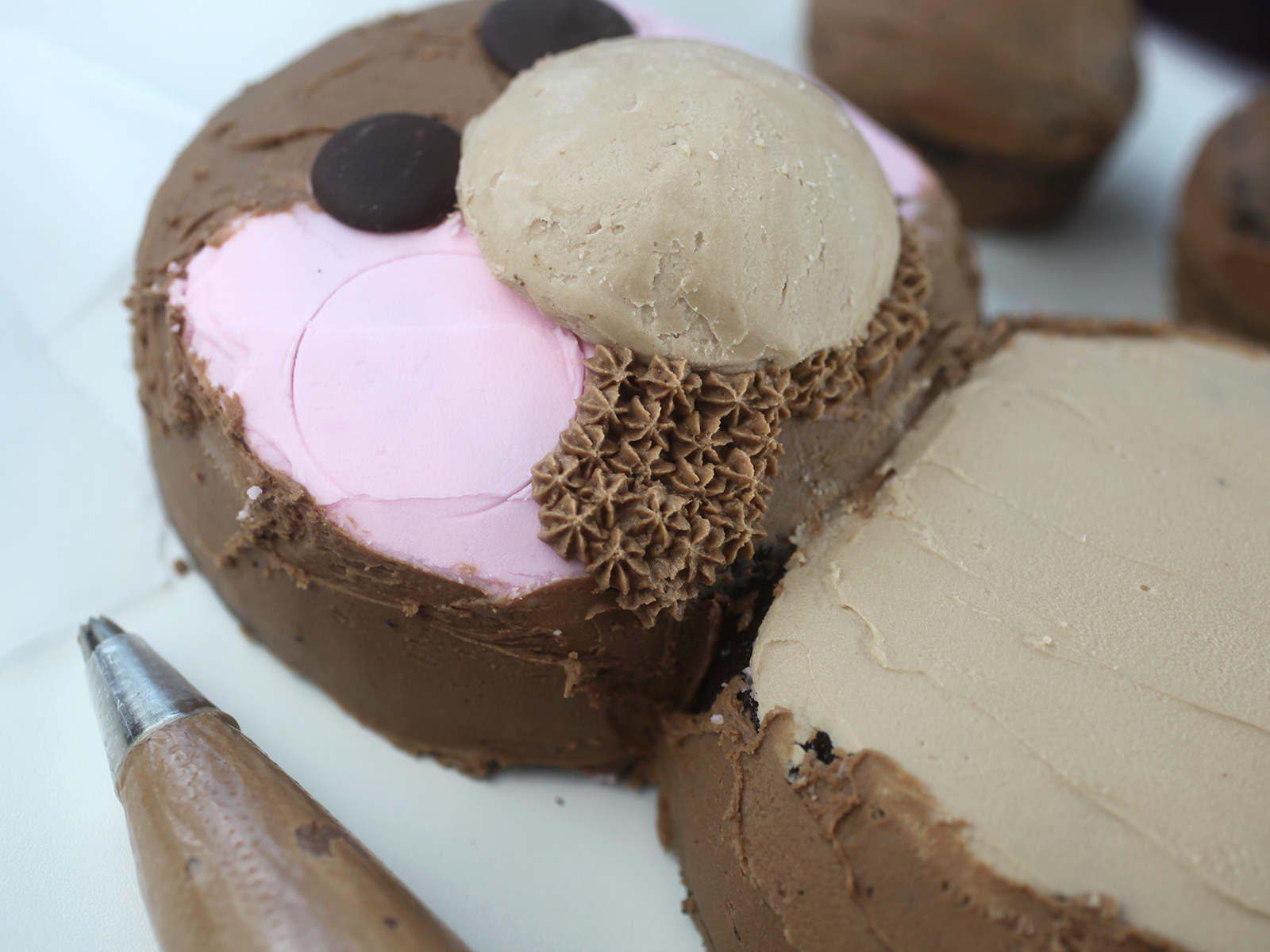 Now you can start piping the darker chocolate frosting using a Wilton #18 decorating tip for the bear’s fur. Use the circular impression as a guide to pipe around for perfectly shaped cheeks. 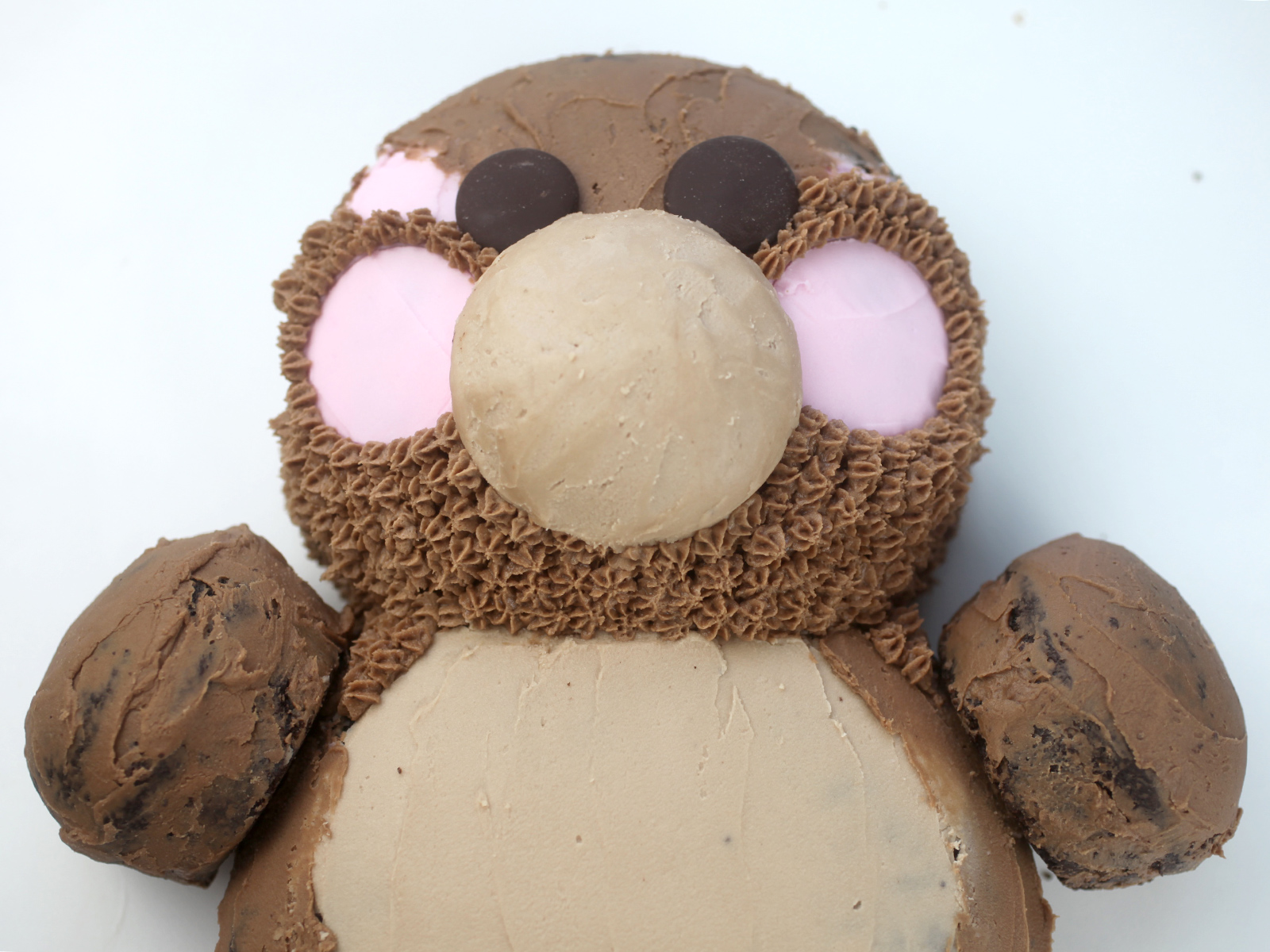 Pipe frosting near the bear’s neck and then place the two chocolate frosted cupcake arms in position. Apply frosting on the bottom of the cupcakes to help secure them to the body. 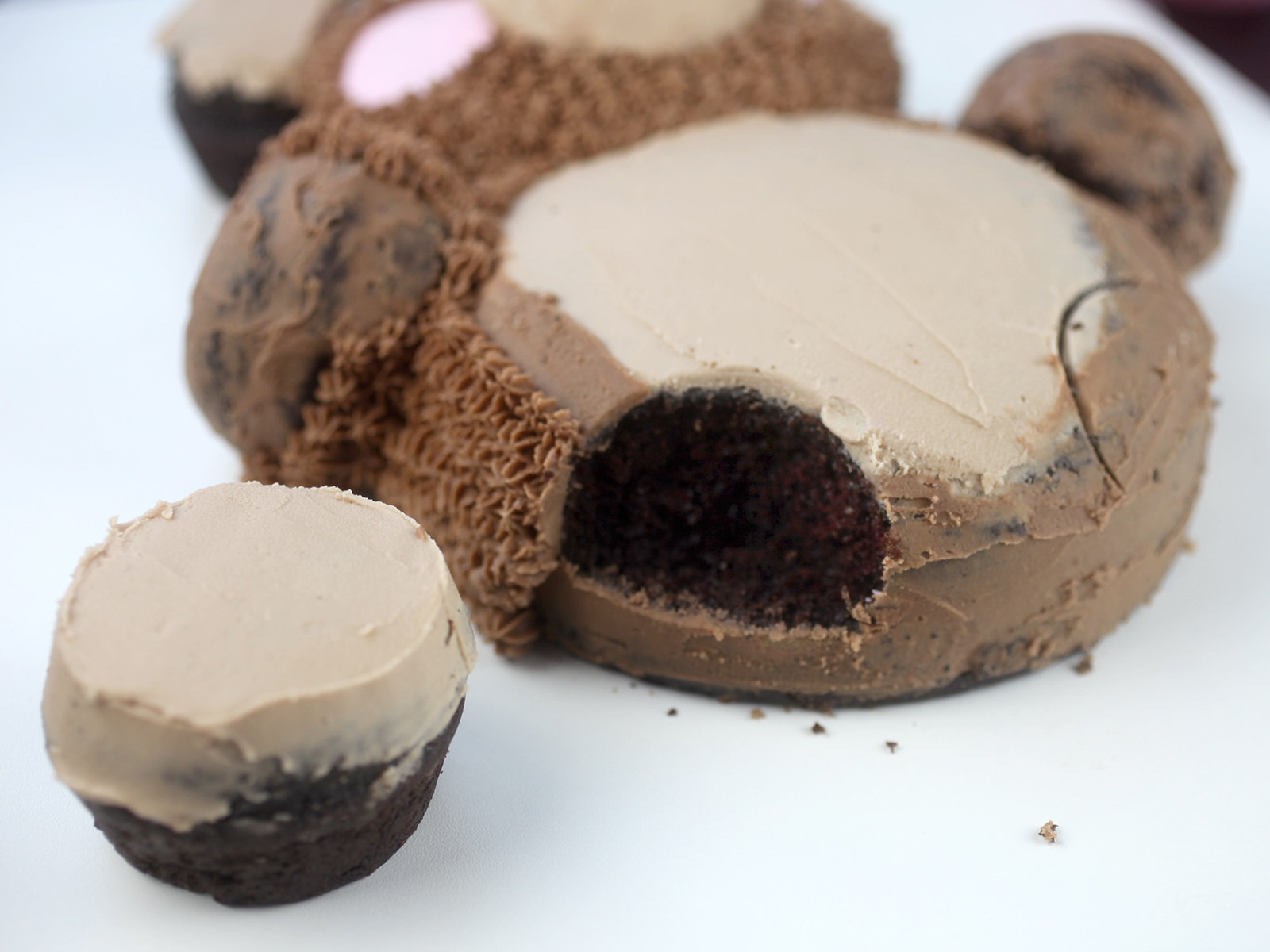 I wanted the legs to be facing forward/up, so I carved away some of the cake and then attached the cupcake to the cake with frosting and inserted a straw through the cupcake and into the cake to help secure it. It worked well enough, but the safest thing would be to cut all the way through the cake so the cupcake legs would be resting on the surface below. 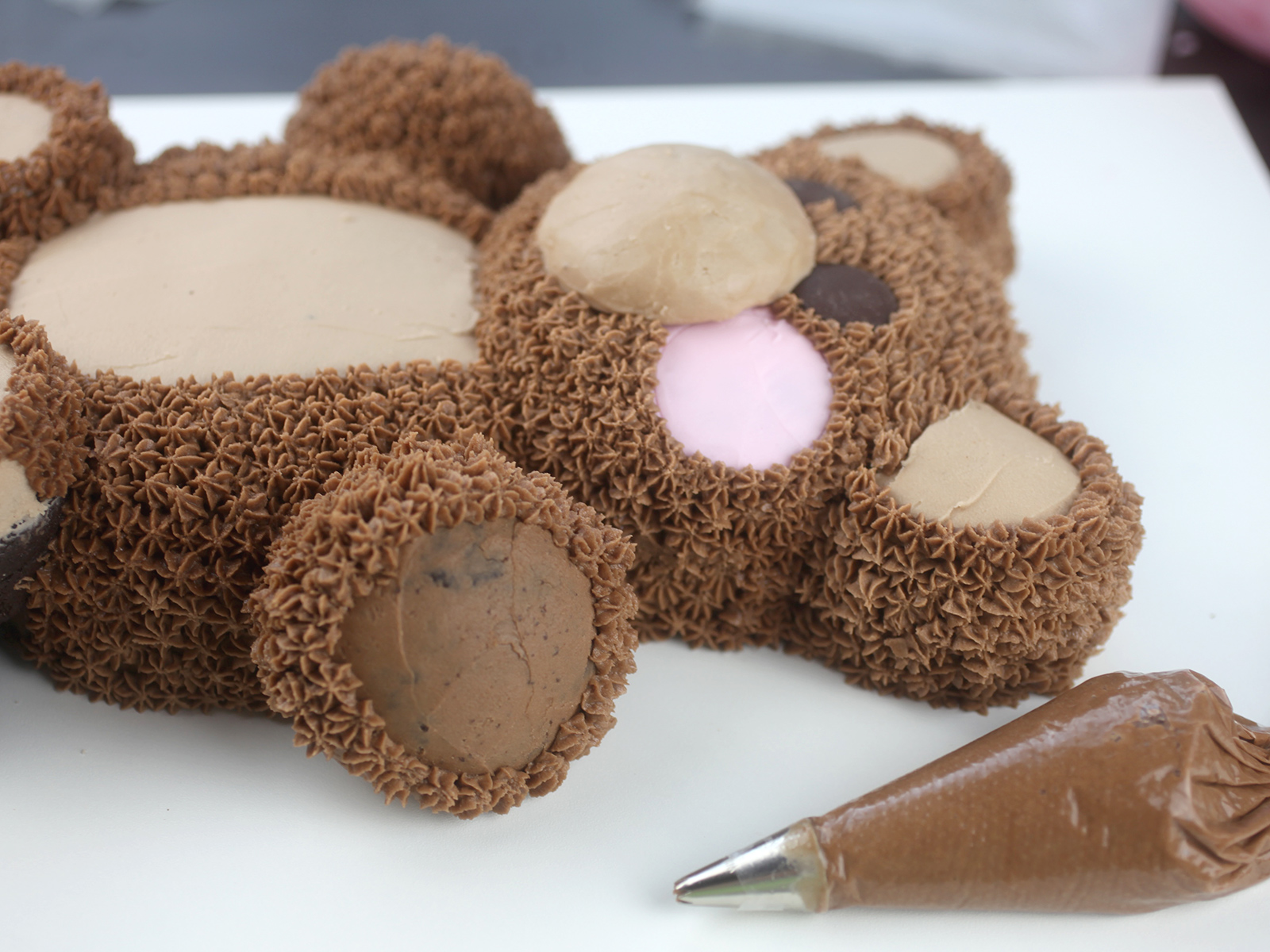 Keep piping all around the body, making sure to leave the light brown frosting of the ears, round belly and bottom paws visible. 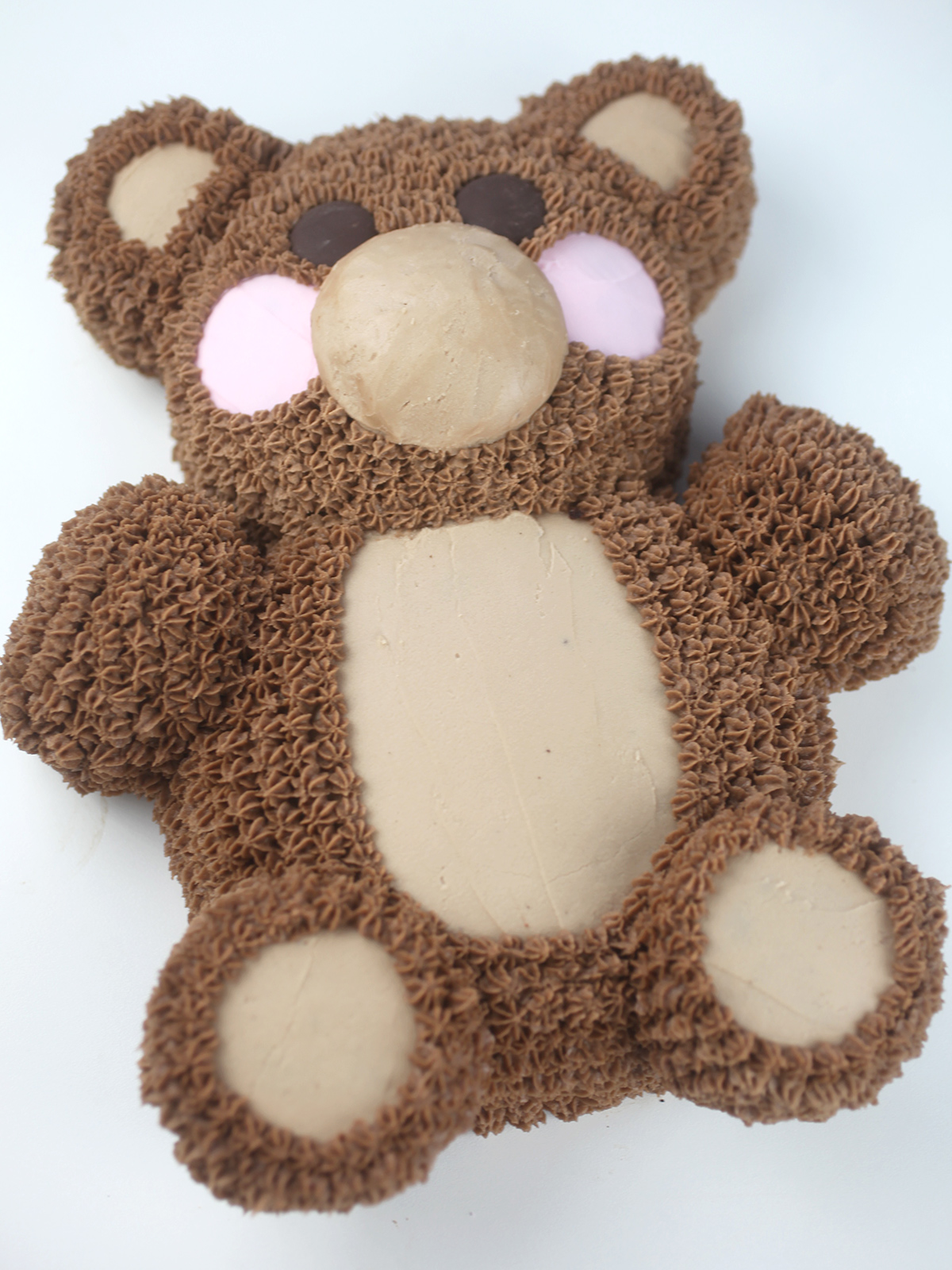 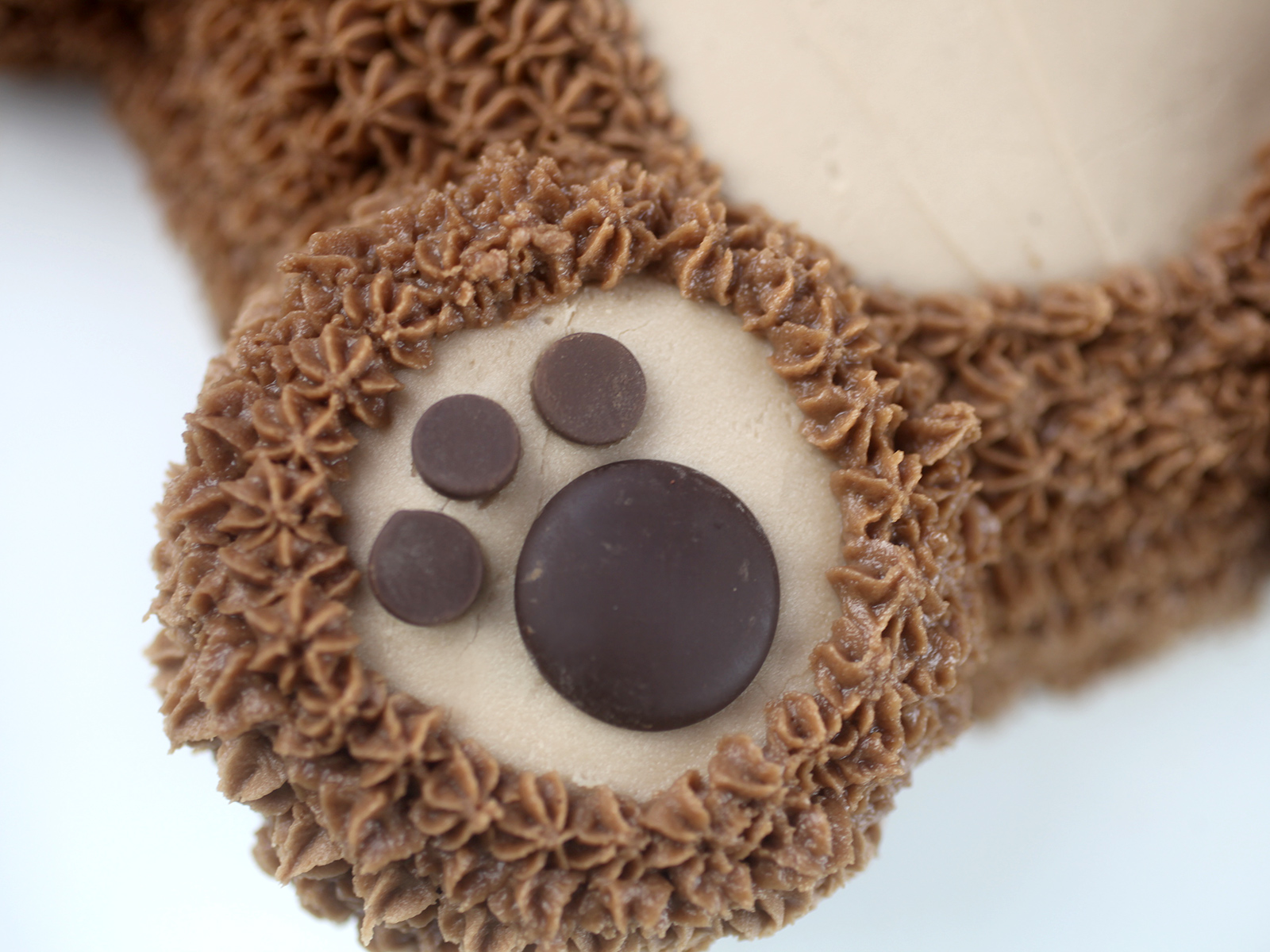 For each paw, gently press a chocolate wafer rounded side up and three chocolate morsels pointed side down into the frosting. 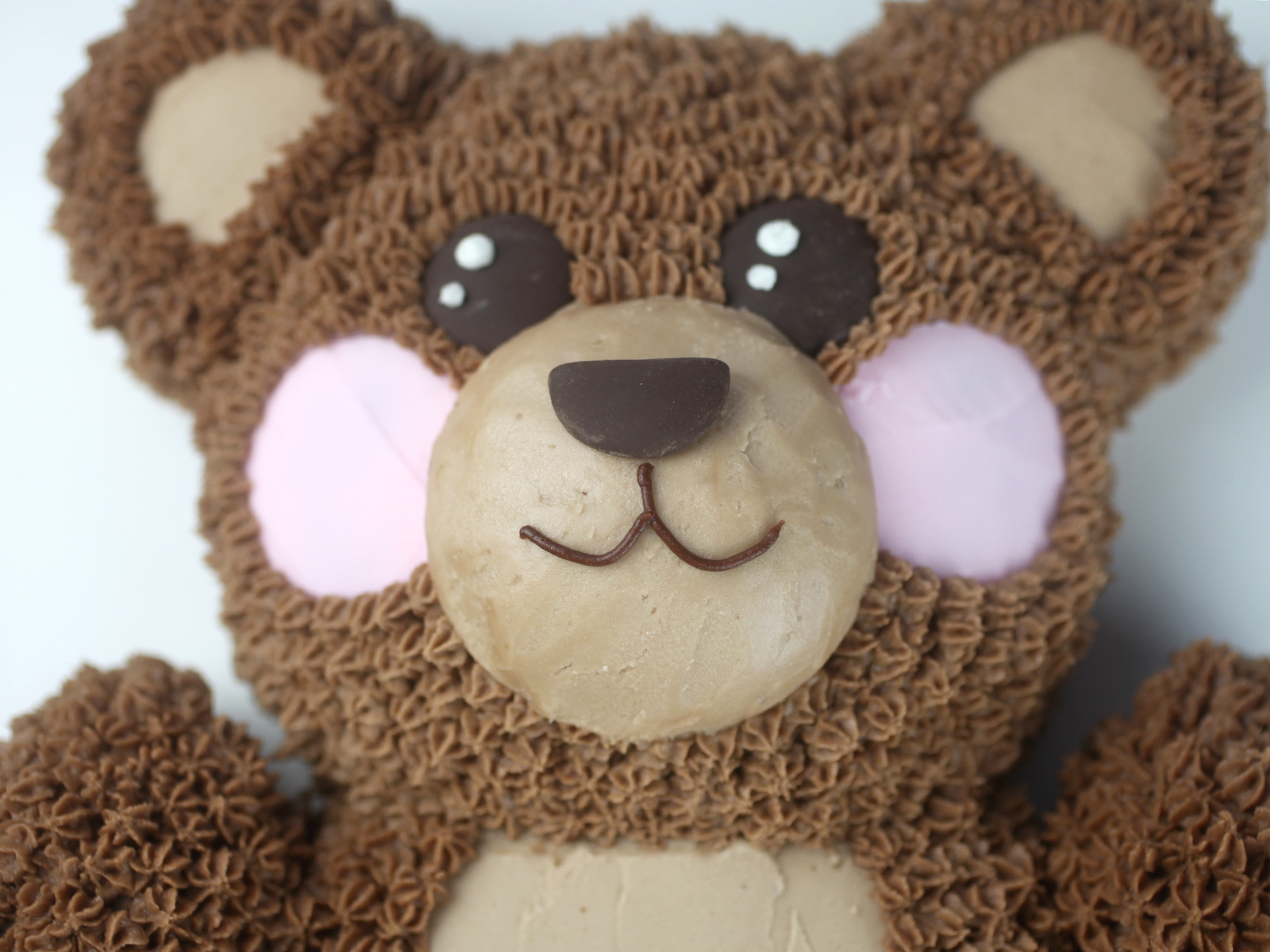 Cut one of the chocolate wafers almost in half and attach it in position for the nose with a small amount of frosting. Pipe small dots on the eyes with some of the reserved vanilla buttercream.

Then tint a small amount of the remaining chocolate frosting a darker brown and pipe on a sweet little smile. 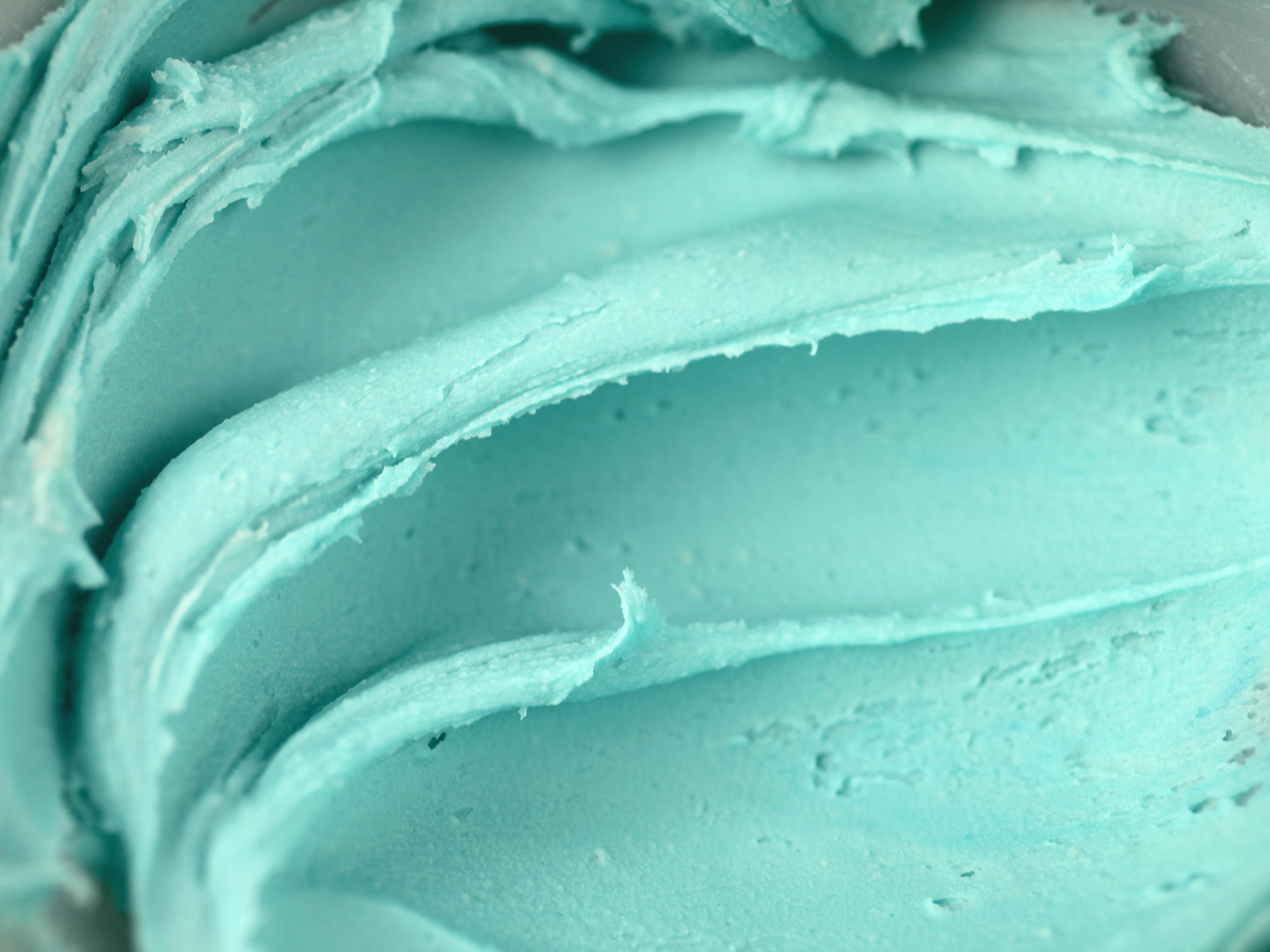 Now let’s make a little bowtie with blue buttercream and some of the leftover cake scraps. 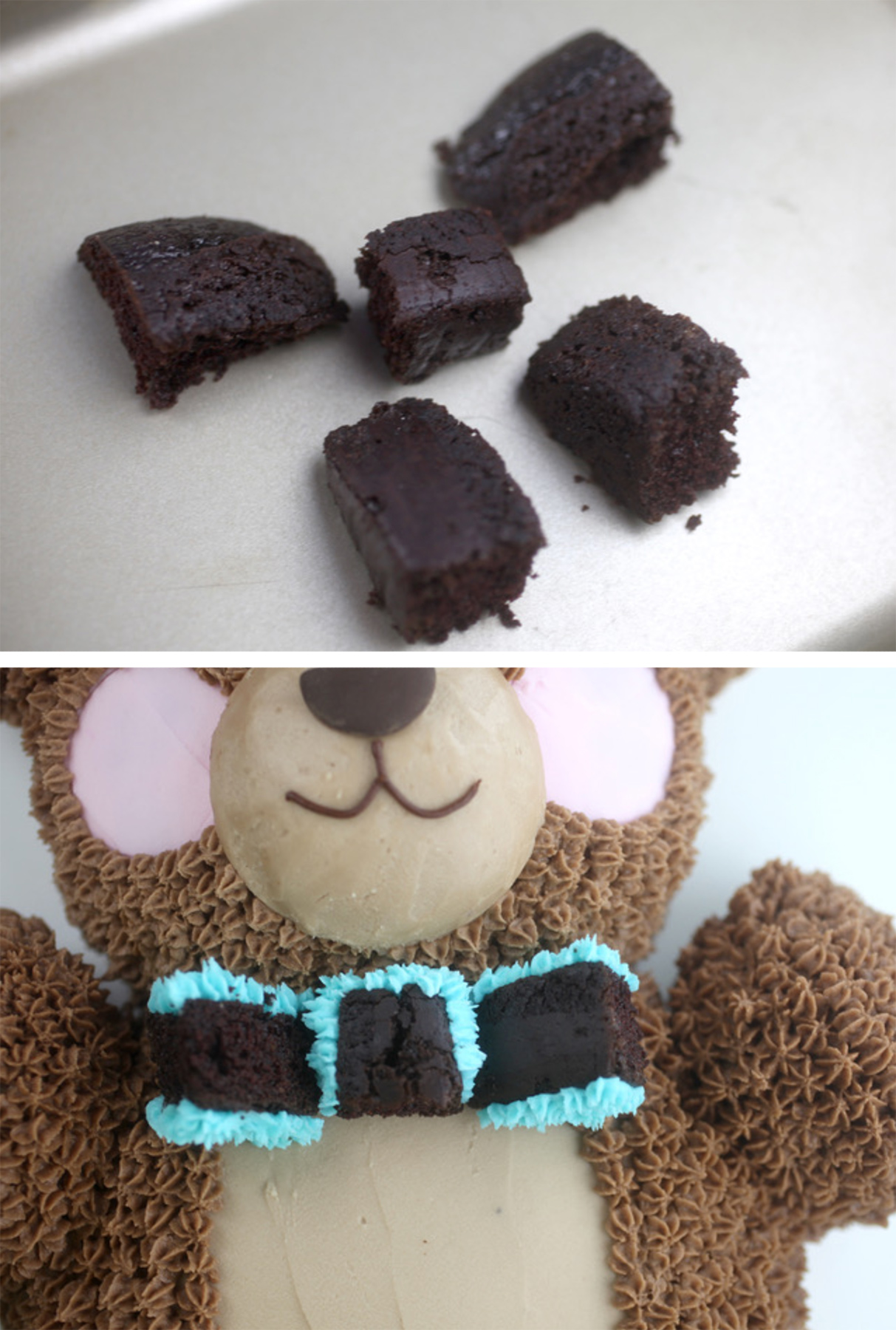 Cut the reserved cake scraps in sections and use them to make a little bowtie. Pipe the sides using a Wilton #16 decorating tip while holding each piece between your fingers. Once the sides are piped, place the pieces in position and then continue piping until the rest of the cake is covered in blue buttercream. 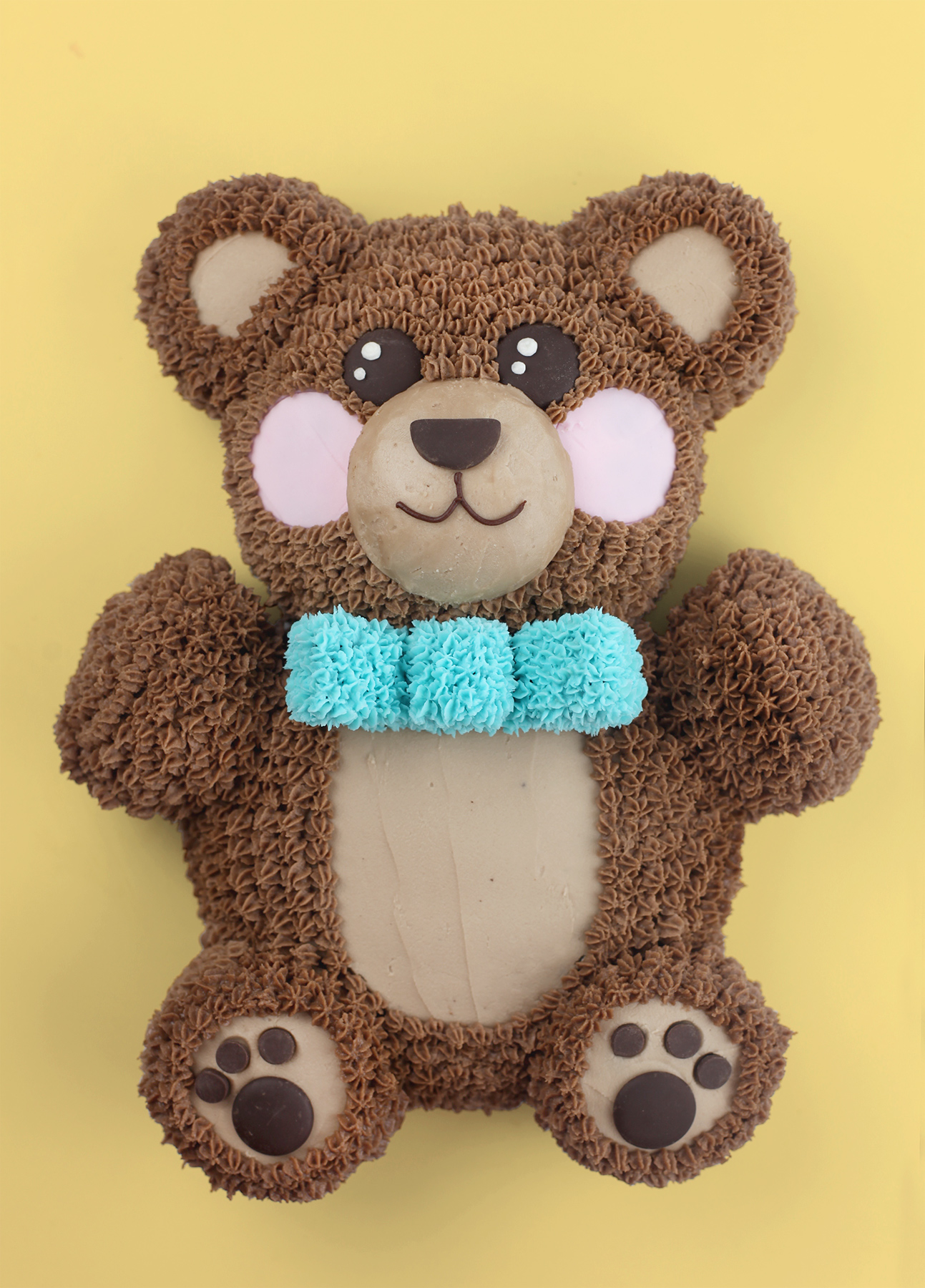 So unbearably cute I could squeeze him! 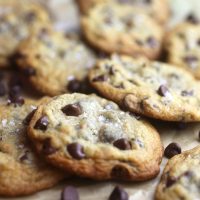 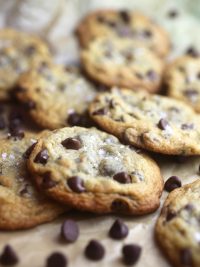 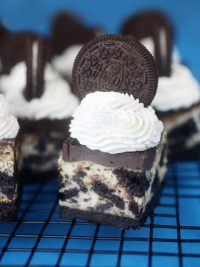